Is the Oil Price Decline Beneficial to the U.S. Economy?

Prices began their swoon mid-year as global supply outstripped global demand. The demand side of the equation weakened as a result of the economic woes of Europe and Asia, increased fuel efficiency and a trend toward alternative fuel sources. On the supply side, the largest variable has been increased U.S. production, up about 50% since 2008 and largely driven by a boom in shale production. Oil prices tumbled further in late November when the Organization of Petroleum Exporting Countries (OPEC) members decided not to curb production. Many observers believe OPEC has an agenda to drive marginal U.S. shale producers out of business by keeping prices low. 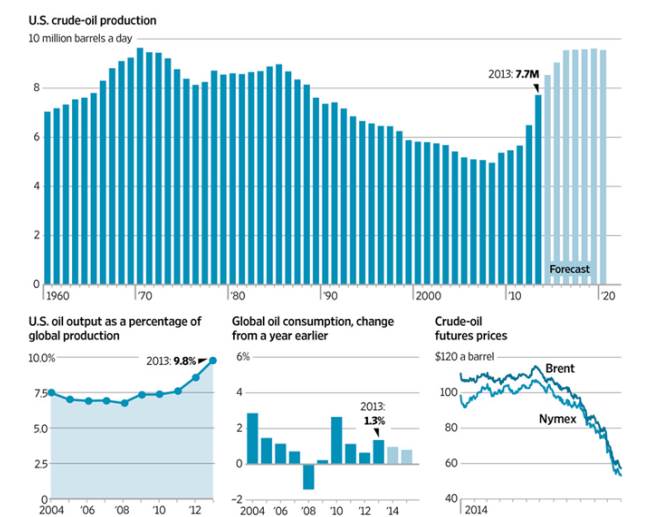 On the surface lower oil prices should be beneficial to the U.S. economy. The United States is a net importer of oil, with imports representing 1.6% of GDP according to JP Morgan. The American Automobile Association (AAA) estimates that the decline in gas prices translates into over $100 a month in savings for the average American household.² Additionally, Goldman Sachs estimates lower gas prices at their current levels is akin to $100 to $125 billion tax cut for consumers.³ The reduction in energy prices clearly will benefit the U.S. consumer, whose spending accounts for 65–70% of GDP. Furthermore, lower energy prices will keep inflation at bay near term and could enable the Fed to keep rates lower for longer.

However, the drop in oil prices is a double-edged sword this time around. One important difference is that the U.S. economy has benefited from its increased oil production over the last several years, which is in fact a key reason our recent economic recovery has been stronger than other developed nations. According to the Manhattan Institute, the U.S. would have remained in recession without its oil and gas boom, which added $300 to $400 billion annually to the economy in recent years.⁴ For instance, the shale boom created elevated levels of capital spending which aided the earnings of industrial companies. In addition, the oil and gas sector accounted for much of the growth in employment over the last several years. From 2007 through the end of 2012 employment growth in the oil and gas sector was up 40% compared to about 1% for total U.S. private sector employment.⁵ The spike in oil production also served as a catalyst for job creation in related non-oil sectors such as transportation, construction and industrial equipment.

The net result is that lower oil prices should provide a tailwind for the U.S. economy in 2015. PIMCO believes the drop in oil prices will add 0.5% to 0.7% to U.S. GDP growth.⁶ Despite the likely headwind of reduced energy-related capital expenditures and job growth, consumer spending is the driving force of the economy and additional money in the pockets of consumers should stimulate a more broad-based recovery into non-energy sectors.

About the Author, Geoff Keeling, CFA

Geoff Keeling joined NFP Retirement as an Investment Consultant in November 2014. In this position, Geoff utilizes his deep asset-management experience and perspective in providing best-in-class investment due diligence consulting to plan sponsor clients. Geoff plays an integral role in NFP Retirement’s Investment Committee, where all quantitative and qualitative aspects of the investment due diligence process are vetted and discussed when providing manager recommendations at the firm level for the firm’s entire client base. He brings with him over 15 years of investment experience. Prior to joining NFP Retirement, Geoff was a Managing Director and Senior Portfolio Manager with Invesco in Houston. Geoff was a lead manager on the Invesco Large Cap Growth Fund since inception and managed over $3 billion in client assets. During his time at Invesco, Geoff was featured in Investor’s Business Daily and appeared on CNBC. He began his investment career in 1995 as an Equity Analyst for AIM Investments. Geoff is a CFA® charterholder and member of the CFA Society of Orange County. He graduated from the University of Texas at Austin with a BBA in Finance.

The High Price of Yield and Perceived Safety

Since the inception of markets there have been particular investments that garnered the attention...

Since the launch of the first target date fund (TDF) in 1993, its story has been an elegant and...

There has been much publicity about active managers’ inability to beat their benchmarks over the...